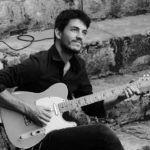 Jean-Baptiste Hardy was born in 1989, and grew up in south of France. He started classical guitar at the age of eight, and studied it for 10 years. In the same time he discovered and learned Chet Atkins and Jerry Reed fingerstyle repertoire. In 2003, 2005 and 2007 he attended the Chet Atkins Appreciation Society festival in Nashville, and was lucky to perform there and meet with great players such as Tommy Emmanuel, Buster B Jones, Jim Nichols, Bruce Mathiske, and many more.

Young guitarist moved to Paris in 2006, started to play in jam sessions, and to perform concerts in several music places, as a sideman and band leader, mixing lots of genres, from fingerstyle to blues, rock, gospel, and world music.

In 2012, he decided to live in Istanbul where he could fully devote to his musical career. Istanbul Francophone Music School quickly recruited him as a Guitar teacher. As Jean-Baptiste is always looking forward to discovering and exploring, he started to study jazz on his own, and developed a great knowledge in harmony and improvisation. He recorded his first album as a trio with Ekin Bilgin and Riccardo Marenghi in 2014.

Early swing and manouche guitar, through great influences such as Django Reinhardt or Bireli Lagrene, and then bebop, bossa nova, funk or fusion got added to his rich repertoire.

He came back to Paris in 2015 where he went on with his trio, and started to perform as a solo player as well, showing all his abilities in fingerpicking, folk, jazz and arrangement. He often plays on Paris jazz scene (Sunset sunside, Marcounet, Cave du 38riv’, Disquaires,…) and around France through different festivals (Issoudun, Couleurs guitare, Marcilhac,…).